I had so many emotions before I sat down to write this interview. I was incredibly nervous about writing it because I really wanted to capture EVERYTHING I learned about Dear Philomena author, Mugabi Byenkya. I wanted to capture his strength, his resilience, his positivity, as well as his utter coolness. I really wasn’t sure how I would do it.

So I just sat down on Labour day long weekend and started writing.

I interviewed Mugabi on August 25, 2017, and what I learned in those 2 hours probably changed my life. I have never met anyone who has endured so much, and yet has maintained such an optimistic outlook on life, and fearless spirit.

To give you a sneak peek into his story, Mugabi suffered his first stroke at the tender age of 9, which left his right side of his body completely paralyzed. He then suffered 2 more strokes by the age of 22 – he is just 25 years old.

His second and third stokes hit him with a new set of health issues. He now lives with chronic pain, constant headaches, seizures, and burning feeling all over his body.

If that weren’t unbelievable enough, Mugabi disclosed that he was supposed to be “Philomena” (pronounced Phi-low-min-a). I know it sounds far fetched, but when his mother was pregnant, her doctors told her that she was having a baby girl – she named the baby Philomena. But when she delivered, she birthed a baby boy, not a baby girl.

Throughout his life Mugabi was told numerous times that he was supposed to be Philomena – his mom even dressed him up for the first year of his life in pink, floral dresses as she purchased them before Mugabi was born, and didn’t want them to go to waste.

As Mugabi revealed more and more about his life, I just sat there with my mouth agape, just looking at him. This young man had gone through so much (lost his father at age 13, and at one point in his life he was wheelchair bound), and I was honoured that I was able to tell just a fragment of his story.

There was sooo much that Mugabi and I spoke about – his health, Philomena, current racial tensions, his fashion choices (please check his Instagram account to check out his funky outfits!), but it was impossible to get everything in this interview. So instead, I decided to draw my focus on what the process was like for him penning the book, which is a series of conversations between Mugabi and Philomena, and what life was like during and after suffering from his strokes.

I know you wanna know more about this brilliant writer who rocks a very cool pair of glasses, so keep reading.

Birthplace: Lagos, Nigeria – his parent are from Uganda

What is Dear Philomena about?

The book is the story of 2015. During that time every single doctor that I saw said I was going to die by the end of the year because my health was progressively getting worse and they couldn’t figure out what was going on.

Why did you write Dear Philomena?

I wrote Dear Philomena as an attempt to deal with what I was going through and also as a way of seizing the day. The book starts off as I suffered 2 strokes back to back.

The main reason I wrote the book was that I was having a really hard time mentally, spiritually, physically, emotionally…. I was doubting my beliefs and my faith. I wondered, “I’ve tried to be a good person, why is this happening to me?” My mom, who is one of the most religious people I know, was questioning her faith in God – she wanted to know why this was happening to her son.

So I started preparing for my death – I wrote letters to my friends telling them I loved them, making sure I said my goodbyes.

One of the things that helped me was writing the book. I started writing it at the end of 2015. If I’m going to die, I’m not about to die without at least attempting to complete a book.

The process writing the book was very difficult. I was writing it when I wasn’t too well health wise.

I started with a very thorough plan. My plan was 37 pages long! I wanted to be 100% sure about everything before I started writing. It was difficult because my health wasn’t good, so I’d write for 30 minutes or so, then I’d have a seizure or migraine. I thought, “Is this worth it? Should I be putting my body through this? Clearly my body is telling me that I should rest.”

But gradually, the more I wrote, the more comfortable I got pushing the time up from 30 minutes every other day, to 45 minutes to an hour. Eventually I could write every day. I wrote for 6 months (January – June) and I was done with the first draft. I didn’t touch the book at all until November. I edited the book from November to January and I cut 2/3 of the book out.

I wanted my book to be accessible to people of all backgrounds and abilities. It’s an easy read – it’s got a lot of layers and complexities, but you can choose how deep you want to go.

What does your mom think of the book?

My mom hasn’t read it. It’s too painful for her. The book gets very depressing. It was a time in my life when I was very, very depressed because of what I was going through. It’s unfiltered.

After self-publishing his book, Mugabi threw a very successful book launch in February 2017, and just recently started his book tour. 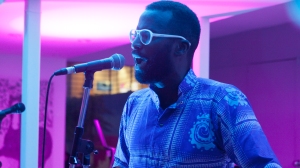 I see that you are touring the book. Was that something that you planned?

A week after my book launch, I was at The Rex listening to some jazz with my friends. I bumped into another friend, he asked about the launch and then asked me, “What’s next? A Tour?

The thought lingered in my mind for a while. I was like, I don’t have any experience marketing or organizing a tour but “let me give it a shot and see what happens.”

I worked a gig in Toronto on July 25 and I thought, let me see if I could get any other gigs. I reached out to people I know – cold called, cold emailed and googled places that held venues for performances. I asked, “ Hey, can I bring a stop on my book tour to your venue?” Can you pay for my performance and can I sell books at the venue?” They said yes!

I perform spoken word poetry; I talk about the book and incorporate poetry inspired by the book. It’s been very, very powerful.

I like the conversations that happen after the show. The fact that I am able to touch people is surreal. People talk to me about things they are struggling with, and thank me for sharing my story – it gives them strength. I like to say that I am spreading, love, light, laughter and vulnerability.

He is definitely someone I will think about whenever I feel like giving up. He didn’t let his health stand in his way of writing his book, nor did it stop him from enjoying and loving life. Totally in awe of him. Thanks so much for talking with me. I won’t ever forget our conversation. Thanks, Mugabi!

For more information on Mugabi and to find out more about his book tour, please visit the following sites: 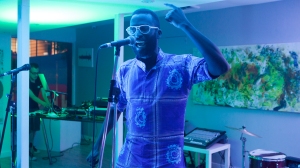