The past 365 days has been anything but average. It’s been one of those years that I couldn’t possibly forget. It wasn’t just events that happened to me personally, a lot had to do with the social climate and the overall dark tone of the year. I have never in all my life witnessed such an overwhelming amount of intolerance, hate, and anger. I’m pretty certain we all know who to thank for that…..

This negativity seemed to linger on throughout the year and repeatedly showed its ugly head on the news and social media. But being a person who prefers not to give into negativity, I worked hard to not let it get to me, and believe that better days were ahead.

So for the purpose of this blog entry, I plan on focusing on the wonderful things that I am grateful for that happened in 2017. Sit back, y’all!

Barely into 2017, I received a message from #HowSheHustles founder Emily Mills expressing that she would like “to do something” in the new year and she asked if I would like to be involved. She didn’t have all the details, but she said she would keep me posted. I of course said yes and that I was willing to do whatever she needed.

That “something” Emily alluded to turned out to be #herstoryinblack – a monumental digital photo series featuring 150 phenomenal black women from Toronto and across Canada. It was a platform honouring and showcasing trailblazing women of colour who made groundbreaking strides in their career, and those who are currently smashing glass ceilings.

The photo series received support from The CBC, and went onto garner national and global attention. In addition to the photo series, a documentary was filmed featuring a few of the women.

Can you believe that I was actually chosen to a part of it? I was one of the lucky bloggers, along with Claire She Goes, to interview some of the ladies and document their story. But guess what….? It doesn’t stop there. Not only did I blog about the #herstoyinblack photo shoots; I was one of the women featured in the photo series! I was recognized for my writing and blogging. Can’t even express the gratitude to Ms. Emily Mills. I was in complete disbelief that I was asked to be a part of herstory in the making. Just being involved in this movement created a bond and sisterhood among the women. It also reassured me that I am a good writer and people enjoy and appreciate what I do.

I will never forget any of it.

This year my blog saw the most traffic I’ve ever seen in the 3-½ years that I have been publishing Words With Michelle.

Besides having readers in Canada and the US, I was shocked to know that I have readers in Africa, Europe, Brazil, the Caribbean, and Australia.

It proves to me that people are always interested in reading about fascinating people – no matter where they are located in the world.

I want to thank all of you for sharing the link, allowing me to do what I do, and being so supportive. Appreciate you all!

After meeting Discovering Diversity Publishing CEO, Sheena Blake in late 2016, we became quick friends in 2017. Our friendship blossomed so much that we wanted to work together. The result was Writing Aerobics With Michelle and Sheena – a fun, weekly video series that showed our genuine love of words and writing.

Although the series was short-lived (it ran for about 6 months), it was something that pushed me waaay outside my comfort zone. (Read: I’m a writer and not particularly comfortable being in front of the camera). But I will admit, I enjoyed it and I am so grateful that Sheena encouraged me to do it. Thanks, Sheena!

MODEL FOR A DAY 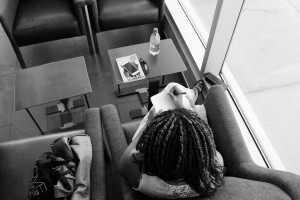 Speaking about doing things out of my comfort zone, I agreed to be a part of a photo shoot with photographer Muhammad Nembhard. If he only knew how the thought of taking my picture scared me. But I bravely said yes.

One of the reasons I said yes was that I wanted to challenge myself and do something completely not me. I also thought it might be a good way to show a different side of my persona.

Glad I did! Although I was trembling half the time, I had so much fun posing for pics. It helped that Muhammad made sure that I was comfortable and liked and approved of the shots.

I loved the process and the images that I updated my social media pics with his images. Thanks for being patient, and helping my brand to grow, Muhammad!

It’s kinda weird to see Toronto events as a highlight, right? Well, it was a major highlight for me. lol

I was actually nicknamed  “social butterfly” because I attended a lot of events, and I was asked to write about a few.

Not only did I connect with cool peeps, I had fun taking in all that Toronto has to offer. (psst – I am a Toronto native who loves discovering new places in the 6)

I happily attended the Donut Festival, BrunchFest, Black Foodie’s Doubles vs. Patties, Afrodelik’s Comic Book Launch, Empowered in My Skin, Beer, Bourbon and BBQ, a Natural Hair Event hosted by Hair By Glenna, The Black Owned Pop Up Market among others.

Looking forward to attending more in 2018!

In 2017 I had to learn to juggle work and my blog. I started a new job in mid May, but due to the nature of the job, I felt as though I had no mental capacity or even energy at the end of the day to do anything, much less write. Most days I was in bed by 10:30 pm.

Thankfully, I made it work and I interviewed and vibed with some of the coolest people. Here is a list of the people that I had the pleasure of speaking with. Click the links to visit the interviews and articles.

MeBookz: Storytelling With A Twist

One Afternoon: Model For A Day