When I do things on the spur of the moment, it usually ends well.

Case in point. I’ve wanted to interview entertainment mogul Trey Anthony for about 2 years now. I’ve emailed her, gone to her workshops, seen her plays, even took a selfie with her, but landing the coveted “Trey interview” eluded me.

Then, about a week and a half ago, I read on Facebook that Trey was eagerly reaching out to Toronto bloggers to help promote her award-winning play, ‘da Kink In My Hair (a play that centers around black women telling their stories of hope, survival and redemption). I took about 2 seconds to think about it, then I quickly tapped on my keyboard and replied,  letting her know that I would love to talk to her about her play.

A few hours passed and I checked my phone and saw a message that read, “we should talk.”  #Yasss I was at work so I couldn’t get up and do my happy dance, so I did my patented chair dance and emailed back saying I was looking forward to it.

I was overjoyed and shocked to see how easy it was. Take note y’all, if you want something – JUST GO FOR IT! NO MATTER HOW LONG IT TAKES.

Trey and I had our brief talk on November 8, 2015 at 10:00 am. I never let on that I was completely geeking out. (damn I’m a good actress!) We spoke about her early days of ‘da Kink, why she wrote it, and the slight changes to the current play.

What is ‘da Kink In My Hair?

It is a story of the lives of black women. It delves into all of the different issues we face. It’s women dealing with everyday issues. It’s one of those plays where you feel that every woman sitting in the audience will find one character or more to relate to and say, “oh my goodness, that’s my story!”

We cover a lot – motherhood, police brutality, shadeism, issues with hair, body image, sexuality, “the black superwoman syndrome” – we cover it all. We give voice to women who usually aren’t given this space.

Why did you write da’ Kink In My Hair?

I wrote it because I was fed up of the stereotypical roles I was being offered. I was doing a lot of comedy when I started in the entertainment scene. I was doing a sketch show with a comedy troupe called Plaitform Entertainment. We were putting on these West Indian comedy sketch shows at Harbourfront and I wanted to branch into doing more dramatic roles. People weren’t offering me them and the roles I was getting were stereotypical – like crackhead #1 and baby mama #2. So I decided to write the show I wanted to see. That’s where it started– “If someone is not doing what you want them to do, then you do it yourself!”

Da Kink was turned into a TV show in 2007. What did it feel like to see your creation on TV? 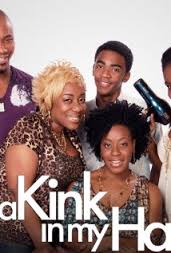 There was a level of resistance around it. I remember my co-creator Ngozi Paul first came to me with the idea of adapting the play into a television show. I didn’t want to do it at first. And it was really around the issue of me being able to have the creativity and the creative control of what the show would look like….and I heard so many horror stories about TV shows. I was just used to doing things my way, so I wasn’t that open to the possibility. But Ngozi is very persuasive and we ended up doing the TV show. It was a great learning experience.

Did you think that you’d still be performing ‘da Kink after all these years?

It’s amazing to be thinking that 14 years later we’re still doing the play in different variations. I’ve adapted it to where I feel the play needed to be – sometimes it’s a bigger cast, sometimes it’s been smaller, sometimes big costumes, big sets, and sometimes it’s been very simplistic. I’ve had the luxury of adding monologues and taking them away. That’s one of the things that I am blessed that I write and produce my own work. I have the liberty to have the creative control on how I want the play to look.

I’ve noticed a slight name change in the play’s title (‘da Kink in My Hair tour- Girls In Red Lipstick). Why did you change it?

I deliberately changed the name to show that there’s a difference in the production and how we are doing it this year. In past productions it was set primarily in the hair salon with Novelette, this time it’s more the women standing in their own truths and revealing excerpts of their lives.

Oooh, the play sounds like it will be just as touching as past performances. Can’t wait to see it.

Interviewing Trey was such a highlight for me. I put a picture of her on my vision board a few years ago, and I am glad that interviewing her came true. Thanks soooo much Trey for our early morning chat! You’re awesome!

For more information on Trey Anthony and ‘da Kink In My Hair, please visit the following sites: