It was recommended by an old high school friend that I feature Casey Palmer – a writer, daddy blogger and podcaster. She went on to sing his praises and provided me with the deets to contact him. (thanks, Cathy)

When she told me that he was a daddy blogger, I was sold.  I didn’t need to hear anything else – I’ll tell you why.

We hear a lot about mommy bloggers (and rightfully so. Mommy’s rock!), but you rarely hear anything about daddy bloggers, much less a daddy blogger of colour. So I felt it was my duty to find out more about this pioneer.

My early evening conversation with Casey Palmer was fun. He spoke about writing about being black in Canada – and what that means; he lovingly spoke about his wife and 2 boys, and how his writing has taken on a slightly different perspective since becoming a dad.

Following the chat, I, like Cathy, felt the need to sing his praises for providing a positive space for fathers to exchange thoughts, but more specifically, Black fathers. I noticed that his blog isn’t totally about parenting and being a dad, but being a dad does seep into his articles.

If you’re looking for posts from a dad’s perspective, or if you want to read stories from a guy that likes to share his thoughts and opinions on any given topic (race, food, travel, #bloggerlife), continue to read.

# of children: Casey is the father of 2 cute boys

Why did you start writing?

I have been writing my story since I was 8, 9, 10 years of age. I’ve always been journaling. I actually got my invite to Live Journal back in 2002 and started sharing online. It became a natural progression moving from that to getting my own domain name – caseypalmer.com. I’ve been blogging on my new site since 2010. 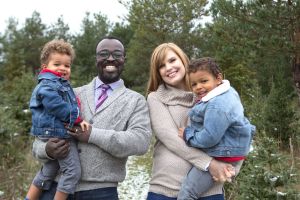 When I became a daddy blogger, I already had the unique experience of putting in years of blogging.

When our first son came along, I was considering hanging up my hat. I thought I’m not going to have enough time for that so I’m not even going to try to be a dad blogger. I had a friend who told me that it was an underserved market so I should really consider making a go of it and see what happens. Here I am 5 years later with a dad blog.

Since we have so few daddy bloggers in Canada – I think that there are at least 2 or 3 dozen active bloggers across the country, we can kinda mold the stories we share in whatever format we want, and for me, I’ve never been one to really mold to a niche very well.

As I get older, and the boys get older, I’ve started to figure out how I can overlap things and tackle 2 or 3 things at the same time. I’m a dad blogger, but have a number of other interests that intersect with that….and being a dad has definitely added maturity and perhaps a better grounding to my content. I’m definitely a better man and creator for it.

Why was it important that you shared your dad experience?

I think it’s needed to see the story of Black fatherhood in a way that doesn’t look like the tropes we’re used to. I write on this a lot and I think back to positive role models for Black fathers, and we’re thinking of Philip Banks, Carl Winslow, and to separate the actor from the character, Cliff. Huxtable. We haven’t really had a strong breakout character of that nature in like 20 years. We’re in this entire cycle of “hit it and quit it dads” or the entire expectation that Black dads really won’t be around. I’m like, “That’s not exactly the case” and we really need to shatter that expectation.

How are you shattering that expectation?

I think we need more narratives that fatherhood needs to be celebrated and not be avoided.  You have this concept that so many dads have kids but they don’t actually stick around to be a father.  But then on the other side, there are a growing number of dads who are super involved in their kid’s lives and do everything they need to do in order to raise their kids and make them live their best lives. We don’t really celebrate that because we have such a low expectation. S fathers need to be present and show that you are willing to do everything you need to do. The world is changing and dads are doing more than they they have in past generations.

Why did you decide to start podcasting?

It gets to a point after writing so long, where you feel you’ve written all you’ve wanted to write – I’ve probably written about 2500 posts. You haven’t necessarily told all the stories that you want to tell; you’re just done with the format you’re telling it in. And now, between podcasting and drawing…I’m toying with other ideas on visual storytelling, there are so many opportunities to leverage all the things I’ve created so far and putting it out in a new fresher format. I’ve grown and I have new stories. I want to take all of that, weave it together into something bigger.

Tales from the 2.9 has been rebranded to Live from the 3.5. (* the numbers reflect, according to the Canadian census for 2011 and 2016 respectively, the percentage of Blacks in the Canadian population). I had the “genius” idea to have a discussion series every Black History Month with fellow Black Canadian content creators. It developed over the years and turned into a podcast series. I started talking with people about a number of topics: being Black in Canada, and the Black Canadian experience. There are a lot of things that unite all of us as Black people in this country, but at the same time, it’s such a diverse culture that trying to lump everything into one box is doing a huge disservice. I’m trying to show that there are all these facets and elements to the culture that come with it, and giving everyone the voice to explain it.

I want people to know that I put a lot of my heart and soul into the work I put out. I want people to really get content, and stories from me that they can learn from, laugh from, and resonate with.

Not sure if there is an end goal I’m working with right now, but for now, I’m enjoying the entire process of building community around the work I put out.

Lucky for me that Casey didn’t hold it against me for not responding to his message 2 years ago. Glad I got to speak to a dedicated dad blogger who is interested in changing the narrative around race, family and being Canadian. Thanks for the chat, Casey.

If you would like to learn more about Casey Palmer, please visit the following sites: